Stout Magazine gives up it with a well-earned #StoutSHOUT for Bumble’s Whitney Wolfe Herd, in recognition of her phenomenal resilience and success.

From triumph to tumble and back to triumph again, online dating’s “Queen Bee”, Bumble Founder and CEO Whitney Wolfe Herd, has one of the most fascinating tales of skyrocketing success.

We’re bringing you Whitney’s amazing story to celebrate our month-long focus on innovation. Join us for a look at the bold, brave and determined #Stoutways she has exhibited as a Forbes “30 Under 30” entrepreneur and the founder of the rare “unicorn” – a company valued at over $1 billion! 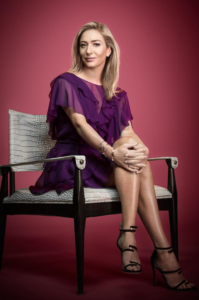 “ What if women make the first move, send the first message? And if they don’t, the match disappears after 24 hours, like in Cinderella, the pumpkin and the carriage?”
– Herd on brainstorming Bumble’s birth

Whitney Wolfe Herd’s journey started with a home run. As co-founder of online dating giant Tinder at the age of 23, everything seemed golden. But in 2014, the ugly side of the brogrammer culture emerged, and Whitney ended up suing her former boss (and former boyfriend) for sexual harassment. While the suit was eventually settled in her favor, she was traumatized.  “I was being told the ugliest things by complete strangers, and they were having full debates about me,” Herd says. “I wasn’t running for office, or trying to be on a reality show – I was just a girl who left somewhere.”

But the passion and energy that led to her early success remained inside her. After toying with the idea of a women-only social support network, she was persuaded by Badoo founder Andrey Andreev to take another swing at the world of online dating. Together, they created Bumble. For 79% of the company, Andreev would supply Badoo’s infrastructure, his knowledge base, and  an initial investment of about $10 million for Bumble’s launch, with the promise of additional funds to support  growth. Herd would retain a 20% share, along with the titles of both Founder and CEO – and free reign to operate the company as she saw fit. Three years later, Bumble has 22 million registered users and more than 70 employees – most of them women – at their new headquarters in Austin, TX. And their most recent company valuation came in at over $1 billion. Now THAT is #Stout.

Think differently.
The thought behind Bumble’s fresh – and successful twist: “What if women make the first move, send the first message? What if we could hardwire that into a product?”

Trust your success.
Herd turned down a $450 million buyout offer from the Match Group earlier this year. Now, her company is valued at over $1 billion.

Never put up with poor treatment.
Herd sued Tinder for sexual harassment, after allegedly being addressed as “whore” and “gold digger”, bombarded her with inappropriate text messages, and wrongly stripped her of a cofounder title. Herd says that she doesn’t “harbor resentment toward anything or anywhere or anyone – I’m too busy.” But there’s no doubt that success of her magnitude is a welcome reward for refusing to crumble.

Stand your ground.
As Forbes writer Clare O’Connor puts it, “Rather than sulk about Tinder, Herd decided to compete against it.” Not only did she not crumble, Herd stayed in the same competitive space, and beat her former company at its own game.

Don’t be afraid to pivot.
Before creating Bumble, Herd was pursuing a women’s friendship network she had dubbed Merci. She even initially turned down a potential backer who wanted her to stay in the dating app industry. “I’m starting a company, and I don’t want to be in dating,” she told him. However, investor Andrey Andreev convinced her to stay where her skill set was strong – and that company because Bumble instead.

When you’ve got a good thing, expand.
Herd is now tapping into the other areas women have expressed interest in, friendship and careers. BFF focuses on friendships, and Bizz is a Linkedin challenger. Both use the same female-first interface that has attracted so many Bumble users. “We’re taking out the soliciting nature and the sexism that exists in networking,” Herd says. “We think we have a chance.”

Check out another hot innovation in the world of online dating with Stout’s fascinating look at new app LUCK.