Deep dives from leaders in the know.

Sam Decker is refreshingly frank about his evolution. He started off charging hard, chasing the adrenaline rush of being in the driver’s seat to create something new. But focusing solely on the win — and the next one and the next — led him to a place where there was an unhealthy balance between his personal and professional life.
He didn’t like where he was headed and wanted to do better by the people in his life. This realization, along with meeting his second wife, Shayna Brown, led Decker to take a deep look within. It was a daunting shift, but he went after it with the same drive that he had once spent solely on business pursuits.

It’s a continual work in progress — he admits that his biggest challenge remains “changing habits that limit me from being a great father and husband” — but it’s work that he has come to value above all else. Decker recently spoke with Stout about his journey, sharing lessons he’s learned along the way and revealing what it takes to radically pivot your purpose. 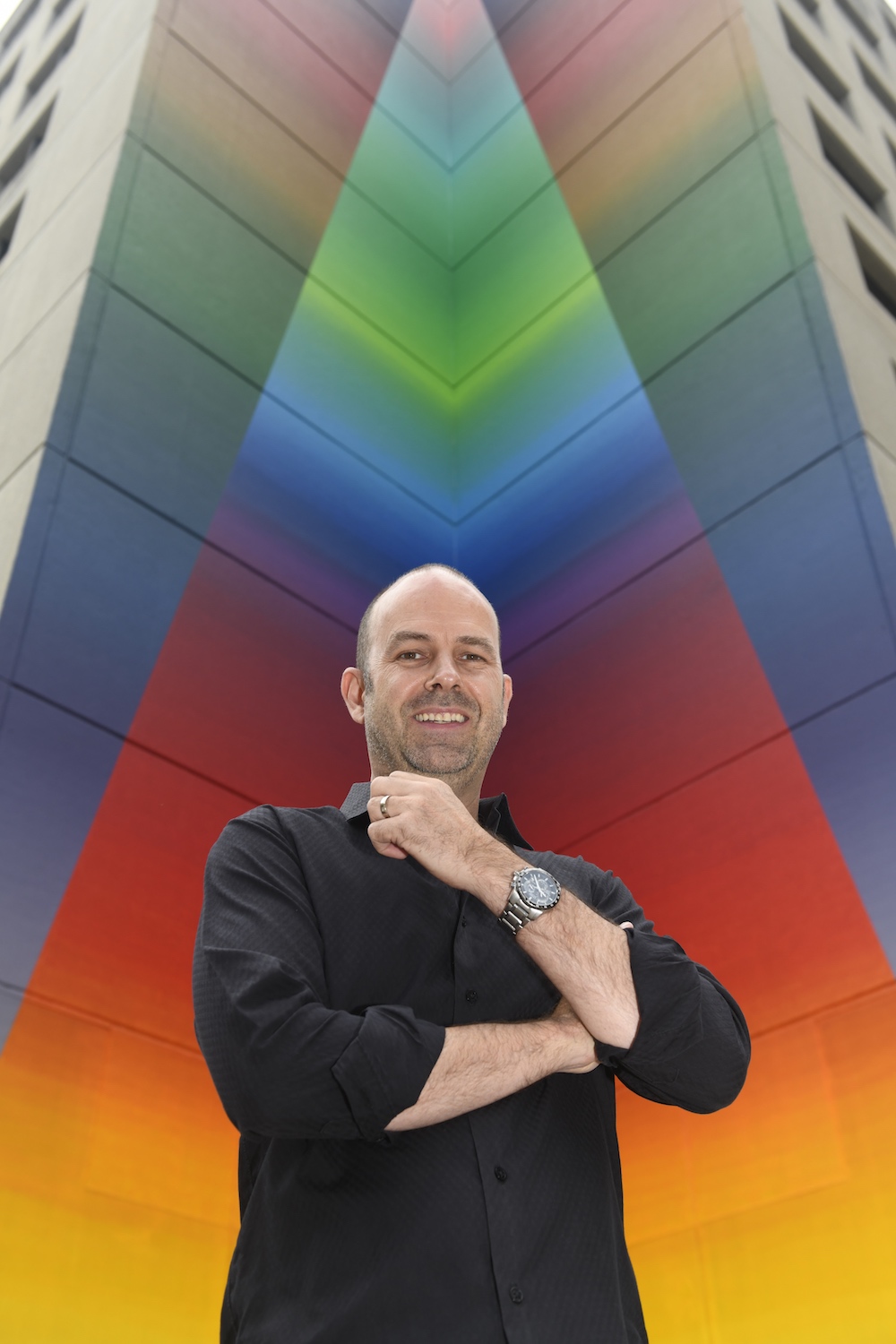 Sam Decker’s formula for goal setting? Mix together objectives + goals into a soup and it should taste like your purpose. Add or remove ingredients until you get it just right.

The Need for Speed

Stout Magazine:  How did your journey get started?

Sam Decker: I was an independent middle child. I got a go kart when I was 10. That became my engine of independence. At the same time, I learned programming on an Apple II. That became an inflection point of entrepreneurship for me.

My independence, the skills I learned and a new perspective on my capabilities set my trajectory as an entrepreneur.
— Sam Decker, entrepreneur, venture capitalist, husband & father

I left college to work for Apple, and coincidentally, our department split off into a startup. At the age of 23 I was a vice president in a new company, and by 27 I wrote two books. My independence, the skills I learned and a new perspective on my capabilities set my trajectory as an entrepreneur.

SM: How do you goal set?

SD: I start with the highest level purpose, of an organization or myself. What are we here for? From there I try construct looser objectives that map to that purpose. Then I try to set time-bound goals that support both purpose and objectives. If you mix together objectives and goals into a soup, it should taste like your purpose. If it doesn’t, then something needs to be removed or added. 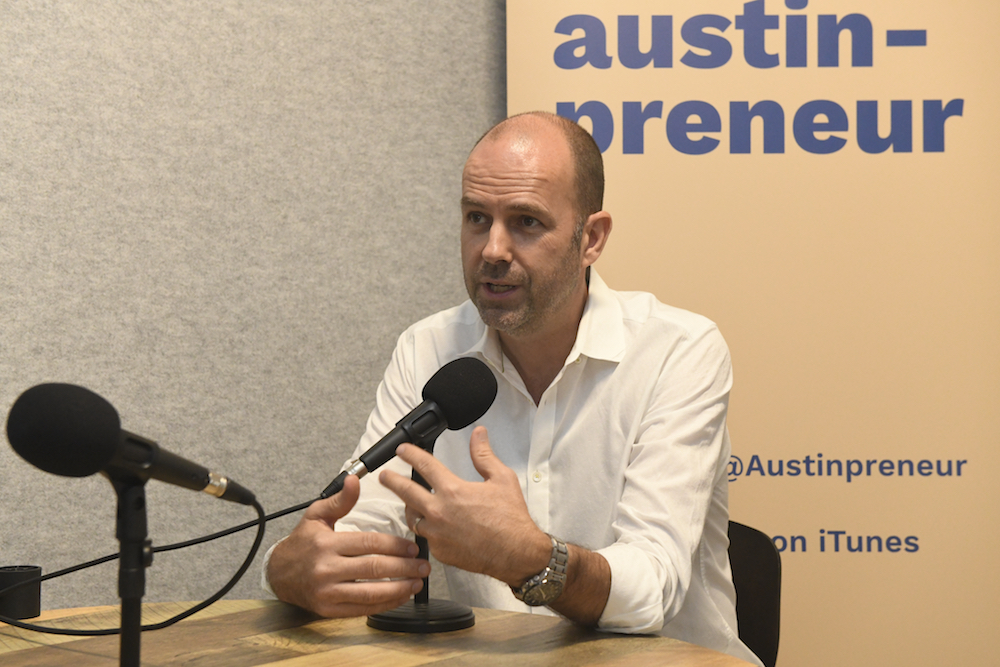 Sam Decker, one of the original Capital Factory Co-Founders, on the Austinpreneur Podcast

SM: Do you use the same philosophies/techniques in business and in life?

SD: Yes-a couple, actually. First, yin and yang. In fact, the symbol is on the back of my laptop and my truck. Throughout my career, I’ve always been middle-brained — which means I can speak the language of the CFO and the creative director (as a mentor once told me). But also I realize in all things, strength comes from diversity and often contradictory forces. So I often think about two sides of a coin, so to speak.

There is also a quote I grew up with from my Dad: “Do the thing you fear and the death of fear is certain” (Mark Twain).  So every time I had a chance to do something that I was either fearful of or didn’t know, I took that opportunity. And if you ever feel like your capabilities and competencies aren’t growing, it’s time to go on and do something else. You’re not doing it because you’re fearful of it. But once you do it, it becomes second nature. So everything I’ve done I’ve never done before.

Eventually you realize that the excitement from a business cycle is fleeting. It’s then that you find yourself on the second mountain, and you need to undo old patterns.
— Sam Decker, entrepreneur, venture capitalist, husband and father 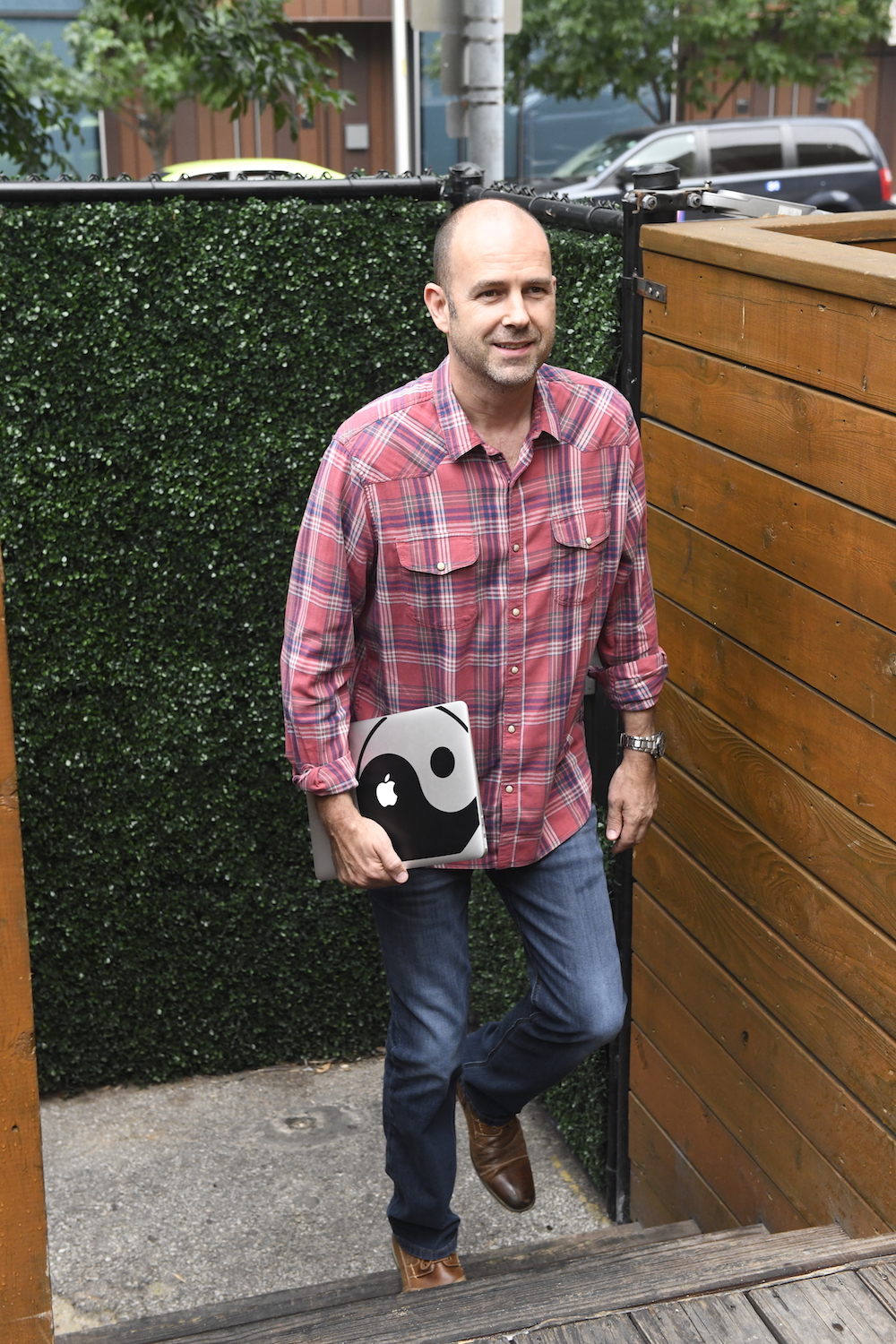 SM: What are three lessons you’ve learned on your journey?

SD: How about creating a list of 100?!
▪ Failures (and pain) are better teachers than success.
▪ People will remember how you make them feel more than anything.
▪ Take bigger risks, earlier.
▪ Initiative and curiosity matter more than experience.
▪ We all want love and connection.
▪ People buy on emotion and justify with fact.
▪ Success is found with balance and diversity.
▪ The hardest and best decisions to make are where to say no.
▪ There are many ways to win.
▪ Creating a safe place for kids and spouse needs to be seen from their perspective.
▪ Understand and get agreement on the goal and problems before inventing solutions
▪ Design matters.
▪ Though it seems hard to leave a job or situation, it’s quickly in the rear view mirror.
▪ Don’t brake in the corner (literally and figuratively). Commit to the turn (in lives and your car) at the right speed.
▪ People will receive feedback more harshly than you meant it, so use finesse.
▪ Everyone is an entrepreneur, at some level. Ignite freedom inside the purpose with your family and employees.

SM: Where do you feel you are now?

SD: In a word, balanced. Or trying to become so. As I mentioned earlier, my perspective aligns with the Yin Yang principle in Chinese philosophy. All things exist in inseparable yet contradictory opposites. I try to round my life out with diverse friends, views, and always be learning.

I’m a great problem-solver, but that’s not the only skill I need to achieve my best life. I strive not just to be successful at work but be a caring and husband and father. And given my success at work, what this means for me now is developing the muscle memory of a great father and husband.

SM: Where do you want to be?

SD: I want to have a wider view on life, learning new skills, knowledge and perspectives. I want to be able to slow down more often. I want an amazing relationship, adventures and memories with my wife. I want my kids to be healthy, happy and independent. I want to feel like I’ve contributed to not just industry, investment returns and careers, but to improving the lives of people I love.

Sam Decker’s Top Takeways on Living the Life You Want
Build NEW Skills. You can build on your strengths, Decker says, but to get what you really want — or to execute a critical pivot — you’ll need to be to be willing and able to build new skills. In fact, if you are trying to make a dramatic shift, Decker explains, it helps to overcompensate in the other direction, at least at first.
Redefine Failure & Define Yourself. Failure is situational — and relational. Early in his career, Decker admits that his definition of failure hinged on a desire to achieve, and please others. As his position, experience and confidence grew, failure became much more about what he expected of himself as opposed to what others thought. You have much more control over how you define yourself than how others do, so embrace that as early as possible.
Consider The Whole Picture. Your life balance sheet is just a snapshot at any moment, and changes over time, Decker says. In his experience, what is really important is building the entire experience that you want, creating an entire painting as opposed to just one corner. What that painting looks like may differ from person to person, but according to Decker, the one constant is the sense of connection that all humans want. 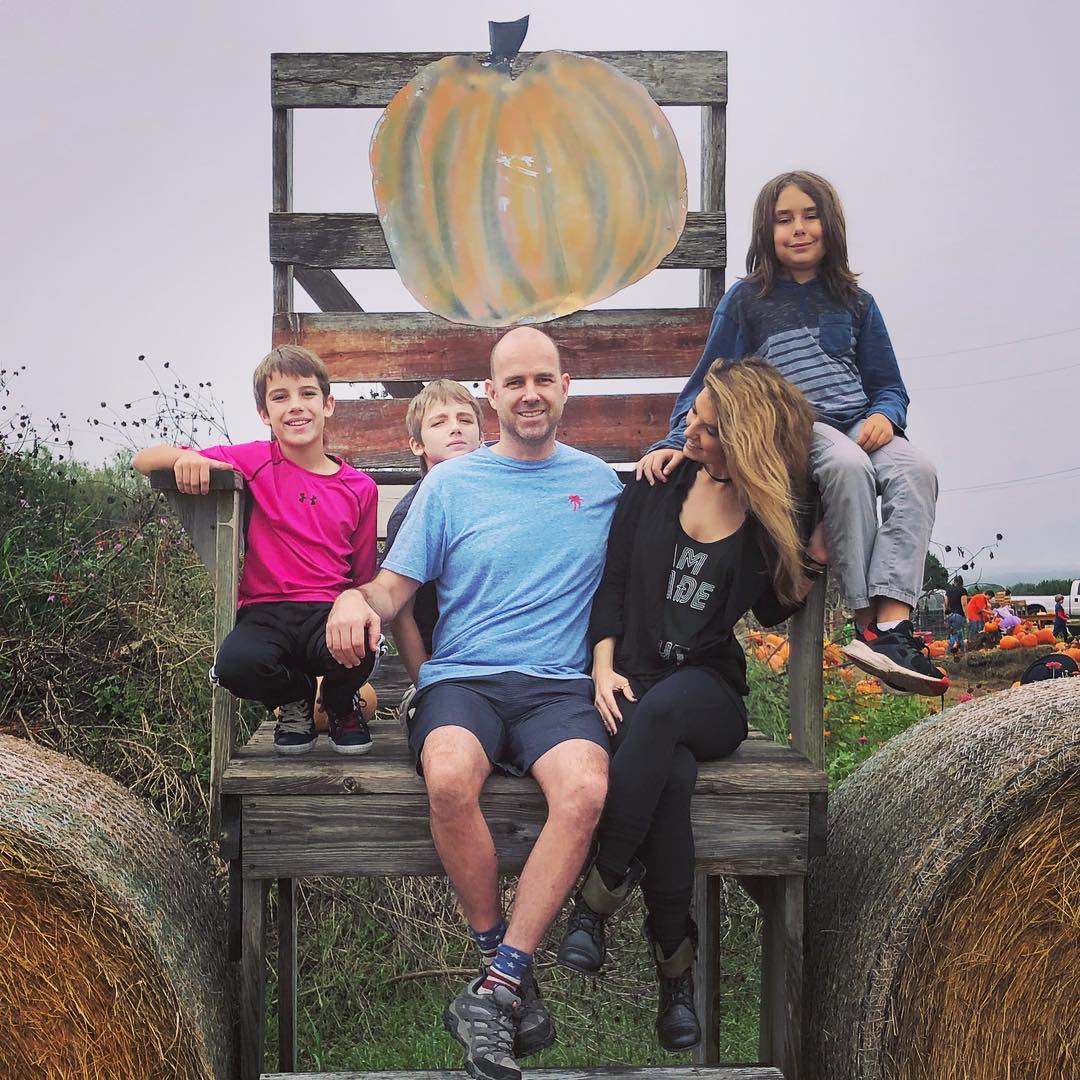 Family is key to Sam Decker’s new found balance: “I want an amazing relationship, adventures and memories with my wife. I want my kids to be healthy, happy and independent.”

Having struggled with balance himself, Decker has some sage words for those who are on a hard-charging path to entrepreneurship and leadership. For those newer to the challenges, he advises, “Think bigger, bolder and earlier. You’re more capable than you think. Set the purpose and goals, and ignite the entrepreneur in those around you. And don’t forget to pour into people along the journey.”

To those who have already tasted success, he simply says this: “Businesses come and go. What are the skills and habits that you haven’t yet mastered to feel like you’ve led the LIFE you want-not just your business or career? As the book says, ‘what got you here won’t get you there’.”

Decker hasn’t lost his powerful drive or need for speed. But now, he’s channeling it into all areas of his life, including a penchant for car racing. And this time around, when that checkered flag waves — on the track, at work or at home — the people he loves are there, and victory is sweet.

Sam Decker refers to reaching “the second mountain” when he made his personal pivot. Written by David Brooks, The Second Mountain: A Quest for a Moral Life, defines the second mountain as life being about others. On the first mountain, life is about yourself. If you’re looking for a spark to power your own reinvention, Brooks’ book is a great place to start.

Plus, there’s plenty more in the Stout archives on resilience and achieving balance — be sure to check them out.