Stout Magazine takes this opportunity to give Kat Cole a well-earned #STOUTSHOUT to celebrate her trailblazing spirit. 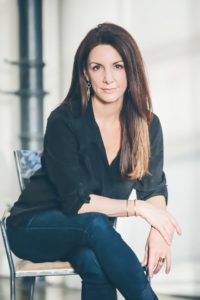 
We’ve delved into Kat’s amazing story to uncover the bold, brave and determined #Stoutways she exhibits as an entrepreneur of her own career, which hold value for anyone looking to make a #STOUT move forward on their own journey.

The Power of Yes

Kat Cole’s rise from Hooters Girl to COO and president of FOCUS Brands (the franchisor of Auntie Anne’s, Carvel, Cinnabon, McAlister’s Deli, Moe’s Southwest Grill and Schlotzsky’s) in under two decades is nothing short of phenomenal.

Beginning at nineteen with her decision to say yes to launching a Hooters franchise in Australia (even though she had never been on a plane before) followed by taking a corporate job at Hooters HQ (at half the pay of her waitressing position), and then obtaining her MBA (without first getting a bachelor’s degree), Cole has always found a way to see possibilities and “think bigger”.

That’s always been my thing: I can see the possible in people and situations where other people can’t. And because I can see it, I can help other people see it too.

An Eye For Potential

Focusing on the good in people and situations is how she runs her career and her life. “When I see people, everyone, every human, I understand that I am in the presence of greatness,” she shares. “Maybe potential greatness, or greatness unpolished, or greatness unfound, but every person has the ability.”

Kat’s Advice: #stoutWAYS To Blaze Your Own Trail

Think bigger.
“Always think bigger than you even think you should. Always make more grand goals, shoot higher and reach further. Re-frame the discussion to what is possible and don’t focus on the risks.”
Gratitude is good, but in moderation.
“If you get too thankful for what you already have, it can hold you back from dreaming bigger.”

Never say no to an opportunity.
When asked to open a chain internationally, she didn’t have passport, so she asked for a day to ruminate – which she used to fly to Miami to get one – and said yes.
Find a way to see every challenge as a chance to learn.
When the owner of Hooters died suddenly and the company was being sold, she chose to stay so she could see first-hand how the transaction happened and learn from the experience.

As a leader, listen really closely to your employees.
“The key, in business and in leadership, is staying really close to the other people who know what is going on so that it doesn’t take you too long for you to figure that out.” You want to avoid being in the position of having all of your employees thinking, “What took you so long?”

Don’t remind your colleagues that you are young.
If you are leading and managing people who are at least a decade older than you are, you need to dress professionally and speak professionally whether at the office or a company event.

Donate your time.
It will come back threefold “The reason all these CEOs were willing to write recommendations for me is because I had given of myself for a decade. I had volunteered.”

Looking for more ways to #BringOutYourStout?

Get inspired by more #stoutSHOUT picks and try our Monday Motivation Action Plans to kick-start any day of the week.