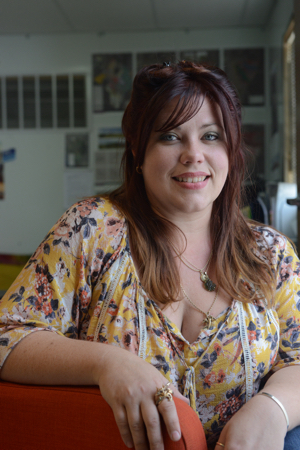 But how does that translate into action?
Sarah King, Fabricator and Special Projects Manager at Quantum Shop, shares the Stoutness behind learning to lead.

BOLD: Taking a degree in art instead of something else. Everyone kept telling me that I’d only be able to teach, not succeed as an artist.

BRAVE: I grew up in the woods, occasionally hunting snakes. One day when I was around 10 or 11, my dad and I walked down to the creek where he’d seen two water moccasin nests. He told me to stay up at the top of the creek bank, while he walked down to check things out. A big hollow tree that had fallen down suddenly started rolling, and knocked him into the water. In that moment, I just charged down there to see what I could do. I didn’t need to save him – he was able to get out without being bit – but I went there.

DETERMINED: At one point in my career, I was working two jobs at once. I was running a crew for Troublemaker Studios for 10-12 hours a day, then coming home and working on a sculpture for another 4-5 hours. If I’d have stopped to really notice what I was doing, I would have been overwhelmed. But I’m stubborn, so I just kept taking the next step. A challenge is something to rise to, not bow down to. 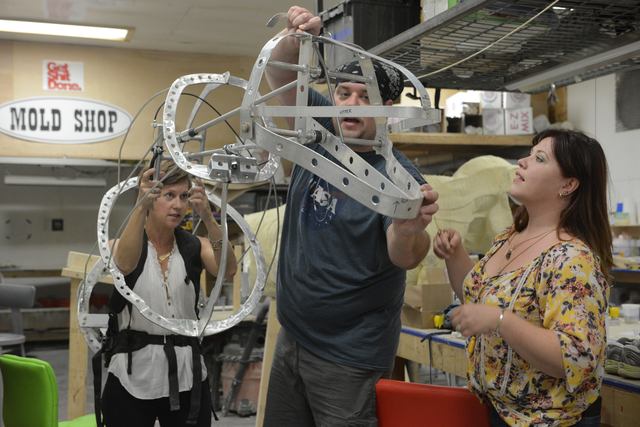 Sarah King didn’t grow up dreaming of being an artist. Homeschooled in a rural community in East Texas, she grew up in the woods. It was, as she said, a different kind of education, which instilled a sense of teaching yourself. College was not necessarily part of the plan, and art wasn’t even in the picture. But off to Stephen F. Austin she went – and had her “a-ha” moment. “Finding art in college,” she shares, “was pretty much amazing.” And though others had doubts about her course of study, Sarah held firm to her newly discovered passion, and moved to Austin, Texas, in 2002 with a degree in metal art & jewelry.

“Sometimes you just have to make a decision, to get started and trust that it is the right one, and if it’s not, be confident that you can fix or change or adapt as you go.  There is no one right way to do something.  But there is a best way for you.” 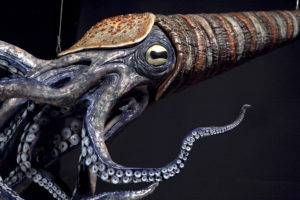 That confidence has taken King on quite a journey as she followed her passion. Her first job was working for a jeweler making wax carvings for castings. But not long afterward, Hollywood came knocking at her door. “I met someone in the film industry who said I should interview for a job,” King remembers. “It seemed like a total change, but it was really just art on a larger scale – and I got hired.” She began fabricating work for Troublemaker Studios, co-owned by renowned filmmaker and screenwriter Robert Rodriguez and producer Elizabeth Avellan. Preferring to work in the shop instead being on set, King made a big impression on head prop fabricator Jeff Poss. So big, in fact, that when Poss pivoted his focus and started working on fabrication for museum exhibits, he tapped her to work for him. At Quantum Shop, Poss’s exhibit creation company, King began working as an exhibit fabricator, sculpting items like the prehistoric Nautiloid she dubbed Gertrude, an imposing, tentacled creature who greets visitors at the Houston Museum of Natural Sciences.

It was creatively fulfilling work, but King wanted more. Realizing that she could increase her value – and her options – by broadening her skill set, she set out to learn non-shop skills, such as running crews and interacting with clients to connect their visions with Quantum Shop’s abilities. Hearkening back to her homeschool roots and that sense of teaching yourself, Poss is allowing King to have a hand in creating her own leadership role using her new skills. King says with a laugh, “I have so many skills sets now that I don’t really have a specific title, but we’ll go with Special Projects Manager”. It’s a move that is both exciting and challenging, as it requires some experimentation, and figuring out things as she goes. In her new position, King now leads the fabricators and other creative team members that she used to work beside every day. It’s a balancing act, to be sure, but she has confidence in what she brings to the table as a leader.

“Faith and respect in leadership comes from your team knowing that you have done the same work yourself. You need to be someone they can work with, not for.” 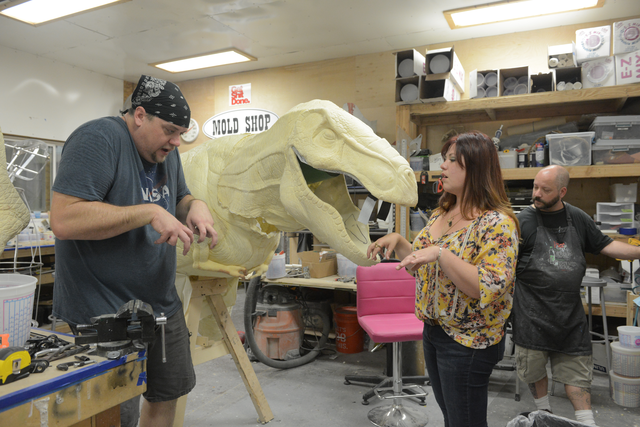 “Leadership 101: Nothing is Impossible”

King admits that the transition has required some real adjustments. For years, her work has had a tangible end product – a sculpture, a prop, a piece of jewelry. With the transition to management, she is learning to adapt to creating intangibles instead. “Success for me these days means having everything connect the way that it needs to connect,” she explains. “My job is to help clients create their vision. Nothing is impossible – with the right combination of time, money and skill, we can fulfill whatever their dream happens to be.”

And there are even bigger dreams in the near future. Quantum Shop is building a groundbreaking, new creative space in a burgeoning development called Wildhorse, located in far East Austin. The artistic possibilities this will lead to have King very excited. “We started with this vision of a new facility,” she says. “Now we’re building something from raw earth into a place to create art. Our company may have a lot of different facets, but everything centers around the ability to create.”

Sarah’s Stout Takeaways from Her Journey in Learning to Lead:

Check out more of Sarah King’s amazing, creative work at Crown Fox Studios. And for some additional #STOUT advice on learning to lead, try our article on leveling up your leadership by looking within.