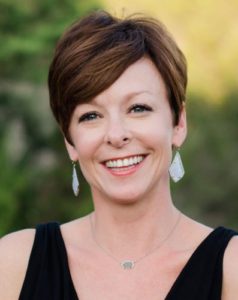 But how does that translate into action?
Stephanie Caillabet, Founder of Art of Wigs, shares the Stoutness behind her craftsmanship journey.

BOLD – Ever since I was little, I wanted to be in the film industry. I was in my early 20s when I decided to make that dream a reality. I moved to Los Angeles with only a friend’s couch to crash on, one suitcase, no job, and just enough for a plane ticket home.

BRAVE – After 10 years in the LA film industry, I decided to move to Austin to focus on raising my kids. Although I was still going to work on film projects remotely, I walked away from a lucrative career for the most important job of my life – being a mom. And I never looked back.

DETERMINED – About a year and a half after we moved to Austin, I decided to start my own company [Art of Wigs], focusing on using my craftsmanship to create medical wigs for patients. It’s an emotional, sometimes exhausting job, but every time a client looks in the mirror and gets the huge smile that only comes from feeling healthy and confident, I know I can keep going. 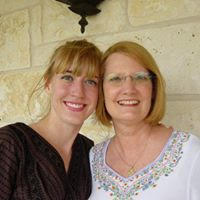 Daughter Lauren donated her own hair for mom Karolyn’s wig

“From Muppets to Medical Wigs”

It’s a long way from the LA sets of The Muppets and Six Feet Under to a small studio in the wooded quiet of Dripping Springs, Texas, but Stephanie Caillabet has relished every step of her journey. Her ten years in LA were full of excitement and glamorous projects, but once her children came along, Caillabet knew she needed to step off the Hollywood merry-go-round. She missed her craft, though, and a chance encounter with a woman in need led her in a new direction. Art of Wigs’ first client was a prominent Austin lobbyist who needed to keep her cancer battle private – because she was also pregnant. With Caillabet’s help, her secret stayed safe, and a new career path was also born.

“When I placed my first wig on someone’s head, I realized that the skills I gained in the film-making industry had made me part of something bigger, something so meaningful. It was a life-changing moment. And now, this is my passion. This is what I love to do.” 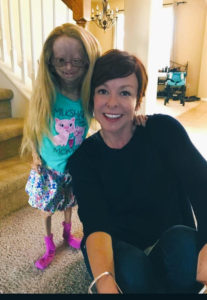 Following that passion, though, can definitely take a toll. In her first two years of business, Caillabet says, “No one died. It was like, ‘yay, Team Awesome’.” Then she lost three patients in one month – a little girl, a woman who left behind her husband of 50 years, and a woman who passed just three days after her wedding, to whom Caillabet had become a friend and confidante, not just a wig maker. For someone who invested so much of her heart into her work, it was a dark time.

“It was so hard, getting to know these amazing individuals fighting their toughest fight, then see them lose their battle. I wanted to give up; I didn’t know if I could do this. And my mom  – my rock – and my friends said to me, ‘Who is supposed to do this, then? If it’s not you, then who?’ And that was it for me. I mean, how can you not be that person if you have the ability to help?” 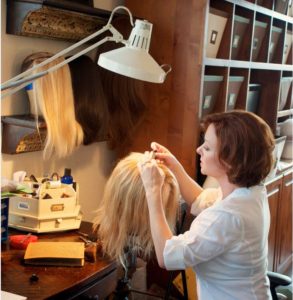 Caillabet at work in her Dripping Springs studio

She stuck with it, and Caillabet’s family and friends are not her only supporters. Her clients love her and the sense of self-esteem that her work gives back to them in the midst of illnesses that often rob them of their dignity. Her youngest client, ten year-old Adalia Rose, is a firecracker of a girl who lost her hair due to the premature aging syndrome known as progeria. Of Caillabet’s craftsmanship, Adalia says, “I like to wear my wigs because they make me feel prettier and famous!” “Miss Stephanie” is an equally enthusiastic fan. “Adalia  has a big piece of my heart,” Caillabet reveals. “Nothing fazes her; she is fierce.”

“They Are All Fighting Something”

Fierce is the operating word in the Art of Wigs studio. In addition to conditions like Adalia’s, and of course, cancer patients, Caillabet also crafts wigs for those suffering from alopecia. Her clients have overcome so much – beginning with admitting they are losing their hair, a very emotional event to process. “All of my clients are super-brave; they are all fighting something,” Caillabet shares. Luckily, most of her clients are not fighting alone. In fact, many of the wigs she makes come from hair donated by a relative or friend of her client. That kind of solidarity is a solace to her, and she considers it a special honor to make those wigs.

With her studio – and passion – firmly established, the one thing Caillabet would love to have is more time. “I get two referrals a day at least,” she explains. “My biggest obstacle is that there aren’t enough hours in the day – I need more hands.” And she means that literally. There are very few people in the country who are skilled in the art and craft of medical wig-making. But rather than complain – whining and negativity are her key energy depleters – Caillabet is solving that problem as well. A graduate of the University of North Carolina School of Arts in Winston-Salem, North Carolina, she has partnered with her alma mater to make medical wig-making part of the school’s coursework. Joining students there via Skype, she is now sharing her expertise with a new generation of artisans.

So how does this master craftswoman view her journey from the beginning to where she is now? “I’ve worked my way up from the very bottom,” she says, “and I’m still working today because every day is different, every client is unique, and I absolutely love what I do.”

All photos courtesy of Art of Wigs.