With the help of a little game called PONG, his mother’s support, and her encouraging gift, Brett Hurt was lucky enough to discover his calling at seven years old. 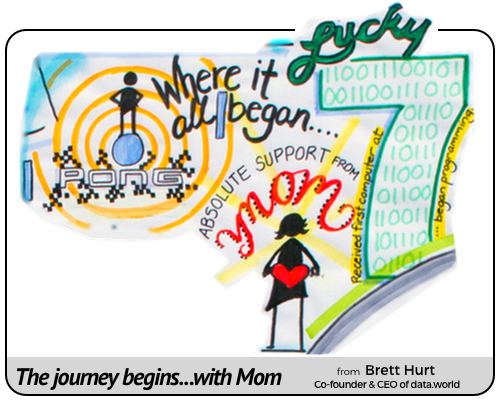 It all started with a mother’s gift – an original Atari with the BASIC programming cartridge and plug-in keypad to program it, inspired by Brett’s desire to take the game PONG apart to see how it worked instead of playing it. Brenda Hurt didn’t fully understand her son’s instant enthrallment with programming, or just how much the future was going to revolve around the skills he was developing. But she boldly believed in her son, and was determined to provide unwavering support for his passion, even as it developed into an all-consuming mission – to change the world through technology.

Listen as Brett talks about his mother’s vital role in his success and honoring his call to action. For more about Brett’s amazingly Stout mother, and how she influenced his life, read his powerful tribute to her, written upon her passing in 2012 on his blog Lucky 7 – named in honor of her and her priceless gift.